​You‘d love to know more about citrus greening, wouldn‘t you? Maybe not as much as you think. ―Citrus greening is not about good plant nutrition but rather about a serious threat to American citrus from a disease that is fatal to citrus of all kinds. The disease is spreading across the United States and would pose a serious threat to Texas‘s 28,000 acres of commercial citrus groves as well as thousands of backyard fruit trees.

Citrus greening is believed to have originated in China in the early 1900s where it is called huanglonbing or yellow dragon disease. The disease is spread by the tiny, gnat size Asian citrus psyllid insect (Diaphorina citri Kuwayama). Yellow dragon refers to the yellow/orange color of the psyllid eggs that coat the new shoots of an infected tree. Not all psyllid insects carry the fatal tree disease but the voracious gnat like insects themselves can cause serious damage to a tree. The sucking insects leave burned shoot tips and twisted leaves on new growth where citrus flowers should develop into fruit. Like aphids, which they resemble, the psyllid nymphs feed on the tree‘s new growth and excrete a white waxy honey dew. Largely immobile, the nymphs are so small they are difficult to see but the adult will jump or fly short distances when disturbed.

Psyllids infected with the pathogenic bacteria that cause citrus greening disease transmit the bacteria to the tree through its sucking. Fruit from an infected citrus tree will remain somewhat green in color rather than develop the more typical peel colors of many citrus fruits. The fruit from an infected tree is misshapen and bitter. It typically will be asymmetrical in shape with one side noticeably larger than the other. Leaves on infected trees may be blotchy in color and have corky veins which are rough to the touch. There is no known cure for the disease and the tree will die. Because the pathogen is a slowly developing disease, a tree can be infected for a long time before the disease is apparent. This gives ample time for feeding psyllids to transmit the disease to more and more trees. Because of this, the best sentinel of the disease is the presence of the insect itself. A qualified laboratory can detect the disease from examination of insect specimens.

Citrus greening gained a toe-hold in the United States in August 2005 when it was first detected in Homestead, Florida just north of Miami. Since then, its presence has been confirmed in Florida, Louisiana, South Carolina, and Georgia. In Florida alone, growers have lost four times as many citrus plants as grow in all of Texas. The insects are now present across South Texas and the disease has been identified in the Valley.  Because of the potential for the spread of this disease, areas known to be infected are under quarantine.

What can you do? Get familiar with this insect. Go to www.SaveOurCitrus.org or www.aphis.usda.gov/citrusgreening to learn more about the disease, including what to look for on trees. Tell others about the disease since it is the vigilance of citizens that most often leads to control of diseases like this. If you are grafting citrus, be sure your bud wood is disease free. Use a trusted source like the Citrus Budwood Foundation. Do not bring fruit into Texas from other states. Not only is it illegal, remember that someone brought this disease to Florida. Don‘t be the guy that brings more of it to Texas. And finally, if you see what you think might be psyllids on a citrus tree or on any member of the citrus family, report it to the extension office right away. 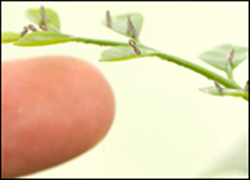 ​The Asian citrus psyllid, which spreads citrus greening is no bigger than the head of a pin The psyllid‘s small size makes it difficult to detect. 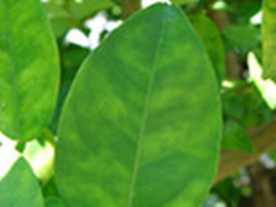 ​Blotchy mottling of leaves and leaf yellowing appear on a single shoot or branch of a tree with citrus greening.  Fruit will not ripen properly and will often be misshapen.