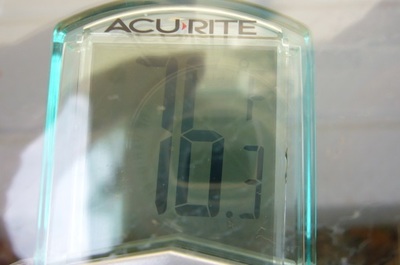 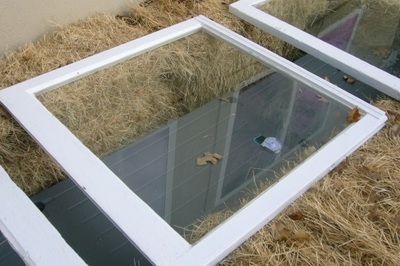 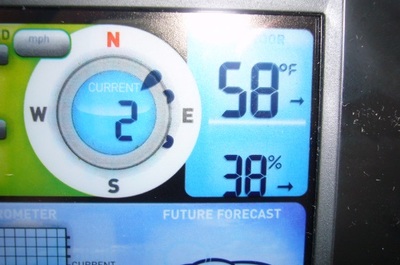 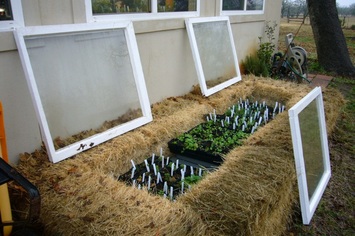 I studied the temperatures and I learned pretty quick that it will heat up VERY quickly in the sun.  It’s on the southwest side of the house so it gets some sun a good part of the day.  I have found that I really have to open it every morning and close it every night.  I’m a forgetful person so I can’t rely on myself to remember to do that just for a sunny day or just for a cold night.  So I do it every day—twice a day.  Tedious but, hey!  What we do for plants!!

Having studied the light and heat in the cold frame, I decided it was time to move in.  I bought some plastic shelves and found two old concrete blocks to get them up off the ground.  The shelves will hold about nine flats of plants in all.  The cuttings have been pretty happy in there.  Most of what I have in it are perennials with the exception of the cilantro.  The cuttings came from plants in my yard so I can see how the mother plants are doing in the cold.  Most of them are ever greens it turns out and they haven’t minded the winter much.  Cilantro is mostly a winter crop here so it’s actually happier out in the cold frame than it was inside—even with the artificial light from Jim’s frames. 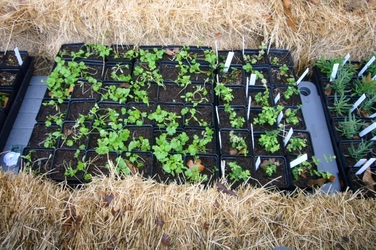 
So with a little effort I think I could have kept it above freezing in there.  I need to come up with a lazy gardener’s method of holding some heat.  I could probably use some form of the water barrel approach going on in the greenhouse.  I’ll keep you posted.  The herbs are loving the rain today and the only challenge I’m having is how to keep from pouring the water that pools on the middle window into my boot when I open the frame in the morning. 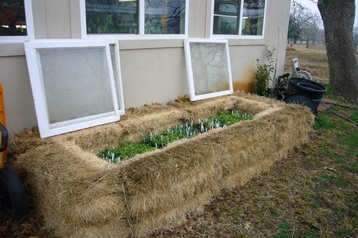 The day before the plant sale set up, I unpacked the cold frame and loaded the car.  I wanted to give you a final take on the cold frame.  I didn’t have enough room in the cold frame for all the plants I was growing for the sale.  So some of them spent a good part of the winter in the shop where they were heated, had protection and grow lights.  The plants that went through the winter in the cold frame were better, stronger plants than the ones that were inside.  The cold frame, with the windows off, gave the plants great protection all spring.  The cold frame plants needed less water and grew faster than the ones inside.  They had excellent wind protection.  The indoor plants had to come outside to harden off before the sale and they didn’t like it very much.  I had two problems with the cold frame plants.  They were packed in there too tight and I had to bring them out of the frame to spread them out.  The hay bales made good shelving though for them to sit on.  And I had problems with caterpillars.  I had about two flats that had too much damage to make it to the sale.  When I unpacked the cold frame and took out the shelves to go to the sale, I found a whole bunch of squatters.  There was a field mouse, a huge scorpion and the biggest gopher mound I ever saw in there.  Next year, I will put a solid block floor in it and use a little BT.

I hope you will try out the cold frame concept.  I think it is a great alternative.