​Have you ever wondered how many “ladybug” or “ladybird” beetles there are?  Well it’s that time of year again, so start counting.  Lady beetles are classified as beetles in the Order Coleoptera which is the largest and most diverse group of insects.  They are in the Family Coccinellidae with 480 plus species in North America.  Beetles have chewing mouthparts thus allowing for a varied diet. Their activities range from eating plant material, pollinating flowers to preying on pest insects.  Ladybug beetles seek out aphids and scale insects therefore they are considered beneficial insects.  Lady beetles in the United States are naturally occurring and introduced species. Introduced Lady beetles species are/were used for biological control of a pest insect or are/were accidently brought to the United States.
​Lady beetles have two pair of wings forming a straight line down their back (Fig.1).  The forewings or elytra are used for protection of the membranous hindwings or flight wings (Fig. 2).  Lady beetles come in color combinations, supporting multiple spots, stripes to no spots (Cycloneda sanguinea) (Fig. 3).  A non-native Seven-spotted (Coccinella septempunctata) Lady beetle has 6 spots on the elytra (3 spots on each wing cover) and one spot in the middle (Fig. 4). 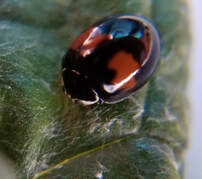 Fig. 5
​Texas has three beneficial species of twice-stabbed lady beetles. Olla v-nigrum is one tiny lady beetle that feeds on scale insects.  The body of Olla v-nigrum is black with two irregular shaped red dots on the elytra (one red dot per wing cover) and a white line on its pronotum (face shield) (Fig.5).  Its larvae are long and “thorny” in appearance.
​Non-native Multicolored Asian lady beetles (MALB), Harmonia axyridis, tend to have an oval body shape and are usually slightly larger than native lady beetles (Fig.6).  The color of Asian lady beetles may vary from yellow, orange to red. They may have no spots or as many as 19 spots. They have a black “M” or “W” shaped pattern on their pronotum (face shield) with more white or cream color present than native lady beetles (Fig.7)
​Lady beetle females lay a cluster of oval shaped yellow eggs on the under side of a leaf or near the larvae food source (Fig.8).  Larvae are extremely hungry and begin eating aphids or scale insects immediately after hatching (Fig.9).
​Depending on the species of lady beetle, the larvae will vary with each species but not within that species.  For example, the larvae of the species Hyperaspis and Scymnus look more like mealybugs than other species of lady beetle larvae (Fig.10).  These larvae are covered in a stringy wax-like substance that’s used as a disguise and aids in repelling ants and other predators.  Do not kill them as they are beneficial!!  If touched, these larvae will move rather quickly whereas mealybugs will not move or move very slowly. 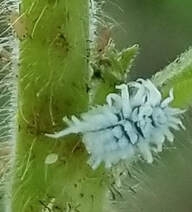