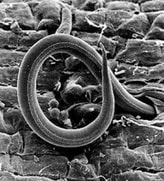 Root-knot nematodes are microscopic worms that can infect vegetable roots causing serious symptoms and producing galls or knots on the roots. The nematodes impede the flow of water and nutrients to the plant. 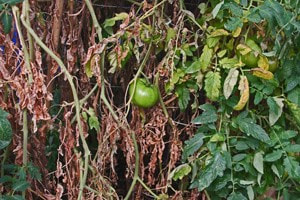 Root-knot is usually not a problem in colder climates because the winter temperatures are too cold for them to survive. A week of subzero temperatures with no snow on the ground could freeze the soil down deep enough to eliminate this pest.
​
Root-knot is easily diagnosed by simply looking at the roots of plants. Gently pull or dig up roots and look for galls or knots on the roots. These galls vary in size from a few centimeters up to an inch in diameter. If found, note which parts of the garden are infected. Care should be taken not to spread the nematode from infested areas to non-infested areas. 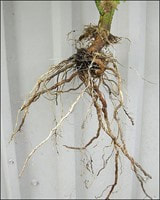 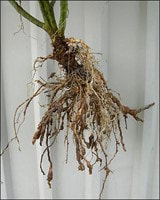 How did it get there?


Can root-knot nematode infestation be controlled in a garden? Yes, but not easily.


Use of Resistant Varieties

Resistant varieties offer the easiest, least expensive, and most effective method of controlling nematodes in the home garden. Nematodes are unable to feed on a resistant variety, resulting in a population decline over time due to starvation (as long as weed hosts of the nematodes are also eliminated). Planting nematode resistant plants (VFN) is a good way of controlling root-knot nematodes, especially if their numbers have not become excessive. There are many varieties of resistant tomatoes, but not many choices with other vegetables. After two years of resistant plants, the number of root-knot nematodes should be low enough to plant a susceptible variety again. A season of susceptible plants, though, will allow the root-knot population to again become high. The best nematode resistant varieties for this area are ‘Valley Cat’, ‘Tycoon’ and ‘Celebrity’ for large fruit and ‘BHN 968’ (‘Dwarf Cherry Surprise’) for a cherry tomato. There are no Heirloom varieties that are nematode and/or disease resistant.

In the home landscape, some bedding plants are resistant to root-knot nematodes including zinnia, salvia and marigold. Some damage may occur to snapdragons and pansies, especially when plants are stressed. Begonias, coleus and impatiens are most likely to be damaged in areas where root-knot nematodes are a problem.

Rotate the Garden to a New Location: This method will help to prevent nematodes and diseases from becoming established in one area. If new space is not available, rotate plants so that resistant plants are moved to an area where susceptible ones had grown previously. Usually three years of growing no susceptible plants (such as asparagus, corn, onions, garlic and strawberries) in a particular garden space is needed to reduce nematode populations.

Fallow Period With Summer Tilling: The population of root-knot nematodes can be reduced significantly in one season by repeated tilling (every 10 days) of the garden soil during the hot, dry summer, to bring the nematodes to the surface to be killed by the drying of the sun. The fallow section must be kept free of weeds and old roots to be effective. Covering the fallow section between tilling with black plastic may help.

Plant Certified Disease-Free Transplants & Seed Potatoes: All plants brought to the garden should be examined carefully for signs of very tiny knots on roots. Avoid planting any plants that look suspicious. On Irish potatoes, small bumps on the surface may indicate infection by nematodes.

Remove All Plants Immediately After Harvest: Destroy plants and plant roots by pulling up immediately after harvest. Do not let stalks stand through the winter. Work the soil two to four times in winter, allowing the sun and weather to exert their killing effect.

Establish a Rotation System: Research has shown that root-knot nematode populations can be reduced in soils that have been previously planted with French or French dwarf-type marigolds. There are some biofumigant plants, such as French marigolds and mustards, whose roots produce a biochemical substance that can be toxic to and kill root-knot nematodes. However, not all mustard and marigold varieties act as a biofumigant. Some varieties that do are: bonita mixed, gypsy sunshine, scarlet Sophia, single gold, petite harmony, petite gold, tangerine, crackerjack and flor de muerto marigolds. Use French dwarf-type marigolds, such as ‘Petite Gold’ or ‘Petite Harmony.’ ‘Tangerine’, ‘Single Gold’ (sold as ‘Nema-gone’), and ‘Lemon Drop’ are also good choices. For the first year, plant marigolds in spots where the greatest amount of nematode damage has occurred, or plant marigolds in strips several feet wide across the garden to establish a rotation scheme. Marigolds must be planted as a solid planting, no more than 7-inches apart. They must be grown for at least two months, and then turned under. Keep marigolds free of grass and weeds to prevent nematodes from feeding on roots other than marigolds. Plant vegetables sensitive to root-knot nematodes — such as tomatoes, okra, lima beans, beans and others — in the marigold area the following spring. Rotate marigolds to the same area at least every other year, as long as nematode problems exist. Planting these marigolds mixed in with susceptible garden vegetables is not very effective. 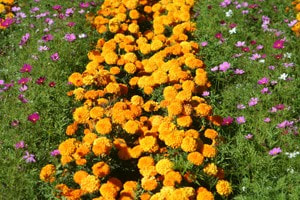 Closely planted marigolds for several months reduce nematode numbers...
Soil Amendments: The addition of any organic matter to the garden will improve soil health, and will increase microbial activity in general, which will have the benefit of improving plant health.